On the 22nd of November 2013 online bidding will begin at TracksAuction.com on the first fully signed copy of ‘The Beatles’ LP (the ‘White Album’) ever to be publicly auctioned. This autographed copy of the White Album is the first ever to surface. The album was originally taken by a South London man from his brother in lieu of a £100 debt in the seventies. It was then stored away in a radiogram in the lounge of a semi-detached house in South London for the last forty plus years, totally unbeknown to the owner that the signatures were genuine. The album was forgotten about until recently when a signed copy of Sgt. Pepper fetched $290,000 in an online U.S.A. auction. This prompted the owner of the album to contact TracksAuction.com to authenticate the signatures and value the album. It is expected that this fabulous autographed copy of what many consider to be The Beatles greatest work could realise over £100k when auctioned. Genuine signed copies of The Beatles post-1967 albums are virtually non-existent. Only two autographed copies of The White Album are known to exist and only 2 signed copies of the Abbey Road LP have surfaced. A signed copy of the group’s final album, Let It Be, has never been seen. 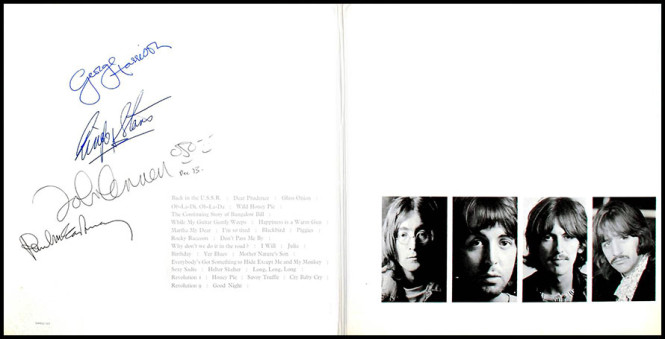 The First Fully Signed Beatles ‘White Album’ Ever To Be Auctioned

The Beatles. An American 1968 stereo pressing of ‘The Beatles’ L.P., commonly referred to as the ‘The White Album’, autographed by all four Beatles on the inner gatefold. This is the rarest fully signed Beatles album ever to be publicly auctioned. The autographs are undoubtedly one of the finest sets ever to appear on a signed Beatles album. The formation of each signature is virtually perfect, they are extremely fluid, bold and vivid. It is a large, attractively spaced set of signatures. John Lennon and Paul McCartney have signed in black pen with John adding self portraits of himself and Yoko Ono, he has also dated his autograph ‘Dec 73’. George Harrison and Ringo Starr have signed in blue pen. Paul, George and Ringo have not dated their autographs but we have inspected them closely comparing them to other authentic examples of their signatures in our reference files from 1973/74 and found those on the White Album to be perfectly typical examples of autographs of the three ex-Beatles from this period. John Lennon’s autograph was most probably signed in the U.S.A., after John left England on August 31st 1971 he did not return to the UK. The other three Beatles could have signed the album when they visited the States in 1974. Alternatively it is possible that the album was signed by Paul, George and Ringo in the UK in 1973 and then transported to America where it was signed by John.

This highly attractive set of autographs have been signed on what many consider to be The Beatles greatest work. Recording began on 30th May 1968 and finished on 17th October later that year. The making of ‘The Beatles’ consumed more studio hours than the recording of any other Beatles album. Derek Taylor, the group’s press officer, writing at the time of the LP’s release saw the White Album as evidence of the fact that ‘…Lennon and McCartney are the greatest songwriters since Schubert…’ The album is an eclectic mix of styles and tunes which swoops and soars to heights unprecedented even by The Beatles exceptionally high standards. Back In The USSR, While My Guitar Gently Weeps, Happiness Is A Warm Gun, I’m So Tired, Yer Blues, Helter Skelter, Why Don’t We Do It In The Road – recordings of sublime quality that would stand out in any musical era or within any genre of music. John Lennon had particularly fond memories of his input into the album. In his Rolling Stone interview he commented. “I keep saying that I always preferred the double album, because my music is better on the double album …I’m being myself on it”. The album also arguably contains George Harrison’s and Ringo Starr’s finest moments. Paul McCartney in an interview recorded for The Beatles Anthology video series gave his view on the ‘The Beatles’: “I think it’s a fine little album. I think the fact that it’s got so much on it… It’s one of the things that’s cool about it… very varied stuff – Rocky Raccoon, Piggies, Happiness Is A Warm Gun. I think it’s a fine album. I’m not a great one for that, you know, “Maybe it was too many of that…” What do you mean? It sold”, and with a magnanimous wave of his hands Paul humorously swept aside any possible criticism, “It’s the bloody Beatles White Album, shut up!”

Autographed Beatles albums are amongst the rarest types of signed Beatles items. During 1962/1963, the period in which The Beatles signed most frequently in order to please their fans, the most usual surface upon which the group’s signatures were obtained was on a page in an autograph book. Beatles LPs and photos etc were more unwieldy and less easy to carry to concerts. Hence, few were autographed. The most commonly signed album was the UK Please Please Me album, followed by the group’s second UK album, With The Beatles. Following these two 1963 releases autographed Beatles albums become increasingly scarce as John, Paul, George and Ringo generally became less interested in signing autographs. Mid-period albums such as Beatles For Sale, Help! and Rubber Soul are very rarely seen autographed by the group. During 1967 the group shunned the limelight, ensconcing themselves in the recording studio and were seldom contactable for signatures except by the girls waiting outside E.M.I’s Abbey Road studios. Only a handful of Sgt. Pepper L.P.s were autographed. Signed Beatles albums from ‘The Studio Years’ are becoming increasingly desirable because they are rising in value faster than any other type of collectively signed Beatles item. An attractively signed copy of Sgt. Peppers recently fetched $290,500.00 in a U.S.A. auction, double its prevailing retail value.

However, it is the late period Beatles albums – the White Album, Abbey Road and Let It Be – which are the scarcest of all signed Beatle albums. (Incidentally, American albums autographed by the group are far more rare than their English counterparts. Only around 12 U.S.A. LPs bearing the autographs of John, Paul, George and Ringo are known to exist). Until we came across this signed copy of the White Album (which has nestled in the storage cabinet of a sixties radiogram in South London for the last 40 plus years, totally unbeknown to the owner that the signatures were genuine!) we had never seen, anywhere in the public domain, a genuine autographed example of this L.P. in our 24 years of trading in Beatles autographs. Given the supreme rarity and desirability of this signed copy of the White Album that we are auctioning at TracksAuction.com on 22nd November 2013, together with the spectacular condition of the signatures, we believe that bidding could quite realistically surpass the £60,000.00 to £80,000.00 estimate placed on the item. It would make an impressive addition to even the most prestigious of collections. Moreover, in view of the dearth of signed copies of Beatles albums released post 1967 (besides the White Album already discussed, only two signed copies of the Abbey Road L.P. have been seen, hitherto, and an autographed copy of the Let It Be L.P. is not known to exist) there is potential for a rise in value in relation to these late period albums greater even than that realised by the signed copy of Sgt Pepper, referred to above, which was sold earlier this year.

The album comes with both a Tracks and a Frank Caiazzo certificate of authenticity. The Beatles signatures on the gatefold of this White Album are supported by a lifetime guarantee of authenticity and a full money back warranty.