Rare Beatles ‘White Album’ Up For Sale On eBay

One of the earliest and most sought-after numbered versions of the Beatles’ ‘White Album’ has been put up for auction on eBay. The album – no. 0000005 – was given by John Lennon to a close friend before it entered the public domain. Number’s 1-4 of the album, which went 19 times platinum, were given to the four members of the Beatles.

Originally self-titled, the album came to be known as the ‘White Album’ because of its minimalist artwork, which was created by pop artist Richard Hamilton. Julia Hutton-Potts, spokesperson for eBay in the UK, described the lot as “a unique piece of memorabilia for any Beatles fan.”

Julia Hutton-Potts, spokesperson for eBay in the UK, described the lot as “a unique piece of memorabilia for any Beatles fan.” The auction, which closes on November 23rd, is expected to raise thousands.

An almost mint condition copy of The Beatles’ self-titled double LP has sold for a tidy £19,201 (almost $30,000 USD) on eBay. The 1968 mono copy of the ‘White Album’ had the lowest serial number in circulation – 0000005 – after The Fab Four themselves snatched up the first four. John Lennon, Paul McCartney, George Harrison and Ringo Starr got the White Album copies numbered 0000001 to 0000004. But since it doesn’t appear these will enter public circulation anytime soon, Record Collector ranked this mint 1968 mono double LP of 0000005 as #1 in its list of the “200 Rarest Records of All Time.” 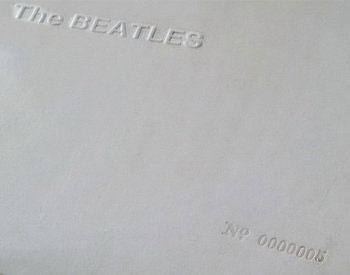 The winning bidder has chosen to remain anonymous, but whoever it is now owns what Record Collector magazine ranks as number one in its list of the 200 Rarest Records Of All Time. Until Yoko Ono decides to sell her private collection. However, we have a few guesses on who the winner could be: Pete Best, George Martin, Jimmy Nicol, Yoko Ono, Sean Lennon (Mom won’t let him play with dad’s), or some sad guy in his basement who sees the light of day twice a year.