Who was Richard Hamilton?

Richard Hamilton was a British painter and collage artist whose art collages of the 1950s directly inspired Sir Peter Blake, who created the Beatles’ Sgt. Pepper cover. He was know as ‘The Father of Pop Art’ and was the artistic genius behind the Beatles’ iconic White Album package design.

Richard Hamilton was a British painter and collage artist whose art collages of the 1950s directly inspired Sir Peter Blake, who created the Beatles’ Sgt. Pepper album cover and was the artistic genius behind the Beatles’ iconic White Album package design.

While less of a household name than Andy Warhol, it was Hamilton who laid the groundwork for Pop Art and first defined its aims and ideals. A lollipop from one of his early collages furnished the movement with its title. His visual juxtapositions from the 1950s were the first to capture the frenetic energy of television and remind us of how strange the vacuum, tape recorder, and radio must have seemed for the first generations that experienced them. Pop art the British artist declared, would be: Popular, transient, expendable, low-cost, mass-produced, young, witty, sexy, gimmicky, glamorous, and Big Business. 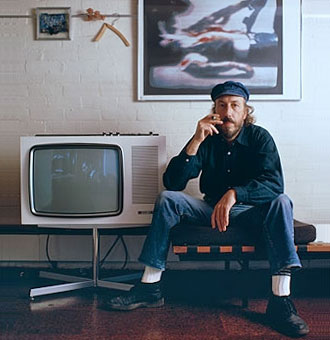 While less of a household name than Andy Warhol, it was Hamilton who laid the groundwork for Pop Art and first defined its aims and ideals. A lollipop from one of his early collages furnished the movement with its title. His visual juxtapositions from the 1950s were the first to capture the frenetic energy of television and remind us of how strange the vacuum, tape recorder, and radio must have seemed for the first generations that experienced them. Pop art the British artist declared, would be: Popular, transient, expendable, low-cost, mass-produced, young, witty, sexy, gimmicky, glamorous, and Big Business.

He was closely associated with the Swinging London of the 1960s. His silkscreen, Swingeing London shows Mick Jagger with Robert Fraser of the Indica gallery in the back of a police car, shielding his face against photographers. As a teacher, one of his art students was Bryan Ferry of Roxy Music. Hamilton is often credited as one of the original pop artists, as well as the coiner of the phrase. For his design of the blank White Album cover and the collage-style poster inside, Hamilton claimed to have been paid the equivalent of just $316.

Hamilton’s 1956 collage titled ‘Just What Is It that Makes Today’s Homes So Different, So Appealing?, produced for the This is Tomorrow exhibition of the Independent Group in London, is considered by some critics and historians to be the first work of Pop Art. The piece has all the human senses cast in various modes; the purpose of the picture was to “provoke acute awareness of the sensory functions in an environmental situation”.

— Richard Hamilton sitting at his desk in his studio at 25 Hurst Ave. in Highgate, London. (1970)
Photo: Chris Morphet/REDFERNS

Born into a working-class family, Richard Hamilton grew up in the Pimlico area of London. Having left school with no formal qualifications Hamilton got work as an apprentice working at an electrical components firm. Here he discovered an ability for draftsmanship and began to do painting at evening classes at St. Martin’s School of Art which eventually lead to his entry into the Royal Academy Schools.

After spending the war working as a technical draftsman he re-enrolled at the Royal Academy Schools but was later expelled. After two years at the Slade School of Art, Richard Hamilton began exhibiting at the ICA where he also produced posters and leaflets and teaching at the Central School of Art and Design where he became a lifelong friend with Eduardo Paolozzi. Hamilton and Paolozzi formed the Independent Group based at the ICA. Other members of that group included the painter Magda Cordell, the photographer Nigel Henderson, the architects Alison Smithson and Peter Smithson, the art critics Lawrence Alloway, Reyner Banham, and Toni del Renzio.

In 1952 through Roland Penrose, who Hamilton had met at the ICA, he was introduced to the Green Box notes of Marcel Duchamp. It was also through Penrose that Hamilton met Victor Passmore who gave him a teaching post based in Newcastle-Upon-Tyne which lasted to 1966. The post afforded Hamilton the time to further his research on Duchamp which resulted in the publication of a typographic version of Duchamp’s Green Box in 1960. Hamilton’s 1955 exhibition of paintings at the Hanover Gallery were all in some form a homage to Duchamp. In the same year, Hamilton organized the exhibition Man Machine Motion at the Hatton Gallery in Newcastle. Designed to look more like an advertising display than a conventional art exhibit the show prefigured Hamilton’s contribution to This is Tomorrow the following year.

The success of This is Tomorrow secured Hamilton further teaching assignments in particular at the Royal College of Art from 1957-61 where he promoted David Hockney and Peter Blake. During this period Hamilton was also very active in CND. In the early 1960s, he received a grant from the Arts Council to investigate the condition of Kurt Schwitters ‘Mertzbarn’ in Cumbria. The research eventually resulted in Hamilton organizing the preservation of the work by relocating it to the Hatton Gallery. In 1962 his first wife Terry was killed in a car crash and, in part to recover from this, he traveled for the first time to America where, as well as meeting other leading Pop Artist, he was befriended by Marcel Duchamp. Arising from this Hamilton curated the first and to date, only British retrospective of Duchamp’s work which also required Hamilton to make copies of The Bride Stripped Bare of Her Batchelor’s, Even and other glass works too fragile to travel. The exhibition was shown at the Tate Gallery in 1966.

From the mid-1960s Hamilton was represented by Robert Fraser at the Indica Gallery and even produced a series of prints Swinging London based on Fraser’s arrest with Mick Jagger for possession of drugs. This association with the 1960s Pop Music scene continued as Hamilton became friends with Paul McCartney resulting in him producing the collage for the inside of the White Album.

Hamilton had also been the teacher of Bryan Ferry and Nick de Ville in Newcastle a few years before and his influence can be found in the visual styling and approach of Roxy Music. 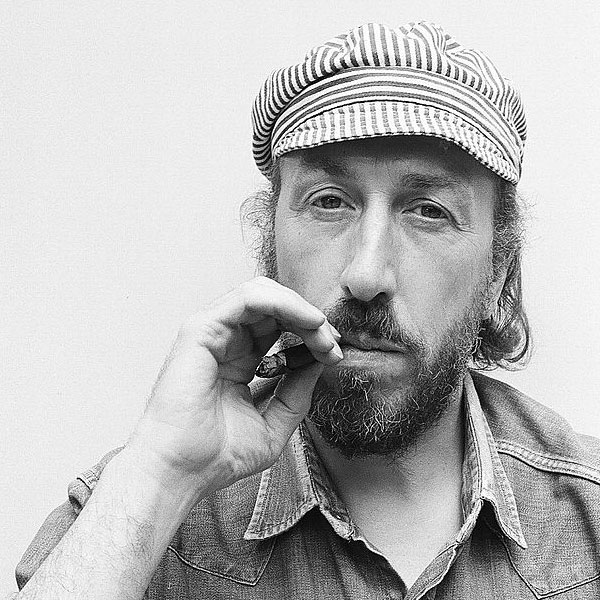 During the 70’s Hamilton enjoyed international acclaim with a number of major exhibitions being organized of his work. He had found a new companion in the painter Rita Donnagh and together they set about converting North End, a farm in the Oxfordshire countryside, into a home and studios. Hamilton realized a series of projects that blurred the boundaries between artwork and product design including a painting that incorporated a state-of-the-art radio receiver and the casing of a Diab Computer. In 1977-8 Hamilton undertook a series of collaborations with the artist Dieter Roth that also blurred the definitions of the artist as the sole author of his work.

From the late 1940s, Richard Hamilton has been engaged with a project to produce a suite of illustrations for James Joyce’s Ulysses. Associated with this in 1981 began work on a trilogy of paintings based on the conflicts in Northern Ireland after watching a television documentary about the protest organized by IRA prisoners in Longcech Prison — more popularly known as The Maze. The Citizen 1981-3 shows a dirty protester with long hair and a beard stylised in a way to make him appear similar to a Christian martyr. The Subject 1988-9 shows an Orangeman, a member of the order dedicated to defending Unionism in Northern Ireland. The State 1993 shows a British soldier on a solitary patrol on a street. Critical responses to the works have been divided with those both on the political left and right accusing Hamilton of naïveté.

Hamilton’s output of new work since 1993 has been limited. In 1992 the Tate Gallery in London organized a major retrospective of Hamilton’s career with an accompanying catalog which provides the most comprehensive review of his career. In 1993 Hamilton represented Great Britain at the Venice Biennale and was awarded the Golden Lion.

The Tate Gallery now has a comprehensive collection of Hamilton’s work from across his career.