On May 11th 1968, John Lennon and Paul McCartney traveled to New York City, to announce the Beatles’ newly-formed company, Apple

After a day of business meetings on May 12th, and a day of interviews on the 13th, they held a press conference at 1:30pm on the 14th at New York’s Americana Hotel. Here, John and Paul described their vision and their hopes for Apple. 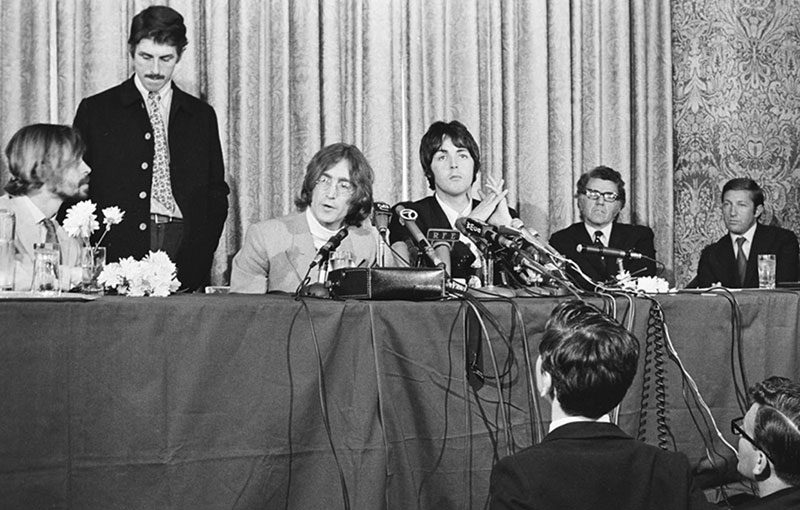 During this press conference, John makes mention of the film ‘Magical Mystery Tour’ not being seen. This is in reference to the fact that, while it was shown on British television, the film was not televised in America at that time. It would not be seen in the states until a much delayed and very limited theatrical release in 1976.

John also mentions his intent to make a film of his first two books, ‘In His Own Write’ and ‘A Spaniard In The Works.’ While this film never materialized, a play based on John’s two books was already in production at this time. The play adaptation, co-penned by actor Victor Spinetti, ‘In His Own Write’ opened June 18th 1968 at the Old Vic Theatre in London.

Following this press conference, John and Paul would tape an afternoon interview with New York educational TV-station WNDT that would air on the program Newsfront. Later this same evening, they would drop-in for a special appearance on Johnny Carson’s Tonight Show, with guest host Joe Garagiola.

Q: Why are you here today?
JOHN: To do THIS. (laughter)

Q: Will they get a hearing?
Paul: Yeah.

Q: What is this?
JOHN: What’s it look like? (laughter)

Q: Looks like a circus.
JOHN: Well, you know, what are YOU doing here? (laughter)

Q: What is Apple, John?
JOHN: It’s a business concerning records, films, and electronics. And as a sideline, whatever it’s called… manufacturing, or whatever. But we want to set up a system whereby people who just want to make a film about (pause) anything, don’t have to go on their knees in somebody’s office. Probably yours.
PAUL: We really want to help people, but without doing it like a charity or seeming like ordinary patrons of the arts. We’re in the happy position of not really needing any more money. So for the first time, the bosses aren’t in it for profit. If you come and see me and say ‘I’ve had such and such a dream,’ I’ll say ‘Here’s so much money. Go away and do it.’ We’ve already bought all our dreams. So now we want to share that possibility with others.
JOHN: The aim of this company isn’t really a stack of gold teeth in the bank. We’ve DONE that bit. It’s more of a trick to see if we can actually get artistic freedom within a business structure.

Q: If a youngster has a group, or their group thinks that they’ve got something going, what’s the best way you’d recommend for them to get in touch with you to let you hear their stuff?
PAUL: Just get the address and send it, you know. That’s it. Just send the stuff to Apple at Baker Street in London.

Q: Will they get a hearing?
PAUL: Yeah.

Q: That’s great.
PAUL: They get a reply too.

Q: John, it said in the (press) release that you are planning to make a film of ‘Spaniard In The Works.
JOHN: Yeah.

Q: I enjoy it, but I’m curious… Have you any ideas on how you plan to film it?
JOHN: Well yes, but not that I can explain, really. I’ve just gotta… make a film of the two books. (giggles) And how I do it, I don’t know. But I’ll do it. I can’t really say how I’m gonna do it. I haven’t got it on paper, you know.

Q: Are the Beatles making another movie?
JOHN: Well yes, but not that I can explain, really. I’ve just gotta… make a film of the two books. (giggles) Well it’s in… We don’t know when we’re gonna make it, but it’ll be, sort of, early next year.

Q: Would you say that Magical Mystery Tour is a better or worse album than Sgt. Peppers?
JOHN: It’s not an album, you see. It turned into an album over here, but it was just the music from the film.

Q: Has anybody bought the film here?
JOHN: I haven’t a clue, you know. We don’t care.

Q: What do you think of the critical reception of the film Magical Mystery Tour?
JOHN: Well I mean, it doesn’t matter. It does, but it doesn’t really matter, you know. It’s why it’s not on now is what matters. That’s why people aren’t seeing it.
PAUL: They were just disappointed, you know.

Q: Did they have any valid points? Were they valid?
JOHN: I didn’t see any valid points. They thought we were stepping out of our roles, you know. They like us to keep in the cardboard suits they designed for us. (laughter)

Q: What roles do they want you to stay in?
JOHN: Whatever they have. Whatever image they have for themselves, they’re disappointed if we don’t fulfill that. And we never do, so there’s always a lot of disappointment.

Q: Are there any plans for showing Magical Mystery Tour in America?
JOHN: Yeah. We’ll put it on in the streets with a screen and a projector. (laughter)

DEREK TAYLOR: Will they be doing a television special soon?
JOHN: I don’t know.
PAUL: Maybe. Quite possibly, Derek. (laughter)
JOHN: But we’re gonna do an LP, so we don’t know what happens until we’ve done that.

Q: Do you ever think you might tour, or do a movie or special here in the United States?
JOHN: It’s quite possible. Why not, except for we live there, you know.

Q: Well, you could visit.
JOHN: Yeah, sure. (giggles) But is it worth the journey, you know.

Q: Do you plan on opening an Apple clothing store in the United States as a chain?
JOHN: No plans that I know of.

Q: Do you consider yourselves as trendsetters for the younger generation in the things that you do, or do they just sort of happen?
PAUL: We follow trends ourselves. I think everyone does. I can never find out who STARTS the trends. It’s someone else altogether.

Q: You certainly have reinforced some trends that you have picked up, whether you’ve started them or not.
PAUL: Yeah. That’s what we do. That’s what happens. They get reinforced, but they’re there already.

Q: What was your basic meaning of ‘I Am The Walrus’?
JOHN: It just means I am the walrus… or I WAS when I said that, you know. (laughter)

Q: You mentioned that you are working on a new album. Do you feel that albums in general should be complete presentations all the time, or could they be groups of songs?
PAUL: They’re always just what happens at the time, you know, but they could be anything. It could just be one long song, a million little ones… you know, it’s just how it turns out. It’s normally about fourteen medium songs.

Q: Have you seen him work live?
PAUL: Yeah. He’s too much, you know.

Q: Why do the Beatles meditate?
JOHN: Because it seems to be nice, like cleaning your teeth, you know. It does have some sort of end product. I think Maharishi was a mistake, but the teachings have got some truth in them.

Q: What do you mean he was a mistake?
JOHN: We made a mistake.

Q: Do you think other people are making a mistake to go see him now?
JOHN: That’s up to them.

Q: (asks question away from microphone)
JOHN: We’re human. (laughter)
JOHN: And that’s all, you know.
PAUL: We thought there’s more to him than there was, you know, but he’s human. And for a while we thought he wasn’t. We thought he was, uhh…

Q: Do you have any other new philosophical leaders?
JOHN: No.
PAUL: Nope.
JOHN: (jokingly) Me.

Q: Do George and Ringo feel the same way about the Maharishi as both of you?
JOHN: Yes, yeah. We tend to go in and out together. I mean, with a few spaces. So, yeah.

Q: Are the Beatles still meditating?
PAUL & JOHN: Yeah.
JOHN: Now and then.
PAUL: (giggles) At this moment. (laughter)

Source: Transcribed by www.beatlesinterviews.org from video and audio copies of the press conference