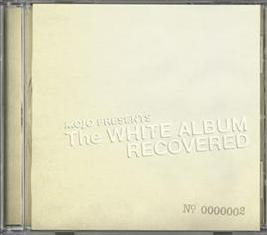 Free CD included with the September 2008 issue of Mojo magazine

The new issue of the British music magazine Mojo celebrates the 40th anniversary of the Beatles’ White Album (a.k.a. “The Beatles”), and it includes a great Beatles-geek exercise: Sequence a single-disc version of the album, in keeping with producer George Martin’s famous complaint that it should not have been stretched to two records. Mojo offers several such suggested versions.

Of course, Paul McCartney’s equally famous defense of the double album, as heard in “The Beatles Anthology,” was “It’s the bloody Beatles White Album. Shut up!” Certainly one of the charms of the White Album is how sprawling it is, though there are certain songs I never again need to hear. Still, whittling the White Album down to 15 tracks, as instructed, is pretty tough.

Here’s my best stab at the single-album version of the White Album, with Side 1 and Side 2 designated because this was a classic record long before CDs came along:

Back in the U.S.S.R.
Dear Prudence
Glass Onion
Birthday
While My Guitar Gently Weeps
Mother Nature’s Son
Happiness Is a Warm Gun
[/column]

This exercise confirms that my two favorite sides of the original album are Side 1 (which I always liked) and Side 3 (which grew on me as an adult). Paul’s cutesy material doesn’t hold up nearly as well as John’s harder-edged songs, though the toughest rocker remains Paul’s (“Helter Skelter”).

I’m tempted to substitute “Yer Blues” for “Birthday”—or to put “Sexy Sadie” in that spot on Side 1 and add “Cry Baby Cry” or “I’m So Tired” to Side 2—but the “Birthday” riff and drumming just can’t be denied, even if the song is slight.

I also almost dropped “I Will” but just couldn’t; it’s an especially sweet song to sing to your kids. Then again, so are “Ob-La-Di, Ob-La-Da” and “Good Night,” and those didn’t make my cut.

Paul was right: A single album just loses too much essential material.

Here’s the real solution: The Beatles should have added “Hey Jude” and the harder-rocking single version of “Revolution”—both of which were recorded during the White Album sessions but released separately as a single—and removed “Honey Pie,” “Rocky Raccoon” and the pokier “Revolution 1.” You’d still have the divisive 8-minute sound collage that is “Revolution 9,” but, hey, it’s the bloody Beatles White Album. Shut up!