The Story Behind The Newly Remastered Version Of ‘The Grey Album’ 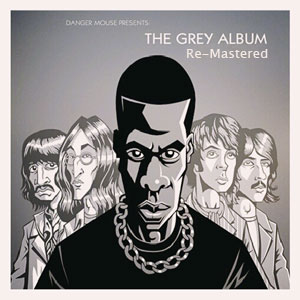 The Grey Album became a cultural tipping point that established the mash-up as a bonafide pop phenomenon; It transformed into a symbol for the burgeoning online remix culture, a work of art that digital activists rallied behind as EMI sent out cease-and-desist orders to take the album down; And it helped its creator, Brian Burton, aka Danger Mouse, skyrocket to popularity and create the venerable pop career that’s made him one of the most beloved producers in the industry.

Stewart first heard The Grey Album the year it came out after a friend gave him a burned copy of the album—the very CD-R Stewart recently popped into his car stereo. A fan of Jay-Z, Stewart really took a shine to the album, which he says he’s always held in high regard. But on that recent car ride something was slightly amiss—the sound.

A graduate of the MediaTech Institute, a Dallas school for media arts, Stewart has been a professional audio engineer for three years and has worked on tracks featuring artists such as Tony Williams, Kanye West, Raheem Devaughn, Wale, Big Boi, John Legend, Chip The Ripper, and Big K.R.I.T. He does all his work from his home in Colorado Springs, which allows Stewart to work at a more relaxed pace, though it’s not without its drawbacks. “I’ve kind of become a recluse and a hermit,” he says.

It’s got plenty of advantages too: Revisiting The Grey Album with an expert ear gave Stewart the ability to pinpoint its audio flaws, and his professional experience gave him the agency to do something about it. Stewart says he first got the idea to remaster The Grey Album on Wednesday, Nov. 21, but it didn’t really click until that Saturday. On Sunday he set out to improve the album’s audio, tinkering with various faders in ProTools until he achieved the desired effect: “I just kind of put the sonics on steroids,” he says. Stewart knocked out the entire project that day and uploaded The Grey Album (Remastered) to SoundCloud and MediaFire on Monday. In the few passing days since releasing the updated version of The Grey Album it’s been covered by sites such as The Source  and FACT Magazine, and a swarm of fans have reached out to Stewart to thank him. “A lot of people have thought that it needed to be remastered,” he says. “So it worked out.”

Stewart says he’s seen people from around the world flock to him—he said his website received about 200 hits from Hungary on Tuesday alone—though personal fame wasn’t the goal. “I wasn’t putting it out to be discovered,” Stewart says. The digital artwork for The Grey Album (Remastered) does include his name on the back cover (“I’ve always enjoyed seeing my name in credits,” he says), but that’s also part of what he considers a pragmatic move. “I wanted people to be aware it was something different,” he says. Among the subtle changes Stewart made to the artwork is a bold border, which also covers up the lower half of his name. It’s more or less a reminder that this is Danger Mouse’s original product, just with a new polish.

While Danger Mouse incurred the wrath of EMI with his original, Stewart isn’t worried that his remastered version of The Grey Album will get him in trouble. “I think that the world and how music is perceived and received is very different in 2012 than it was in 2004,” he says. Though he initially didn’t consider the legal ramifications of his project, researching the fallout from the original Grey Album gave him the confidence that he won’t be reined in for remastering the album considering EMI didn’t seek any further legal recourse after sending its cease-and-desist letters. Stewart merely took something that’s already available as a free download and “gave it a makeover” eight years after it debuted. “I’m not trying to profit off it,” he says. “I’m not seeing any harm.” Stewart says he’s even seen someone from EMI tweet positing things about his remaster.

Danger Mouse has yet to weigh in, though fans have already begun posting it to his official Facebook page. Perhaps he’ll give it the remastered version same endorsement the original received from Jay-Z and Paul McCartney, and perhaps Stewart will get a career boost akin to the one Danger Mouse experienced back in 2004. No matter what may happen to Stewart in the future he’s certainly found an interesting way to subtly remix the legacy of a classic mash-up album without changing a thing.