The “White Album:” The Untold Story

In this, the 50th anniversary year of The Beatles conquering America, interest in the band is the highest it’s been in years, partially thanks to the CBS CBS +0.15% event commemorating the Fab Four’s break into the States on the Ed Sullivan show. You’ll read many stories about the group and those times in the next few days, but you likely won’t see such a rare look at what it was like to work with the band recording the songs that today are considered modern standards. Here’s an excerpt from Abbey Road to Ziggy Stardust, the memoir of engineer/producer Ken Scott (which I was lucky enough to co-write), one of only five sound engineers ever to work with the band. It’s a rare inside look at what it took to finish the band’s biggest selling album ever – The White Album.

“The White Album was very different from what The Beatles had done before, and that led to it being much disliked when it came out. People were expecting Sgt. Pepper Number Two, but that was not The Beatles way, as in their world, everything needed to constantly change. People seemed shocked by this album. It was stark and much more basic rock n’ roll compared to Pepper, but thankfully over time it’s grown to become one of the most loved Beatle albums, even climbing to number 10 on Rolling Stone magazine’s “The 500 Greatest Albums Of All Time.” 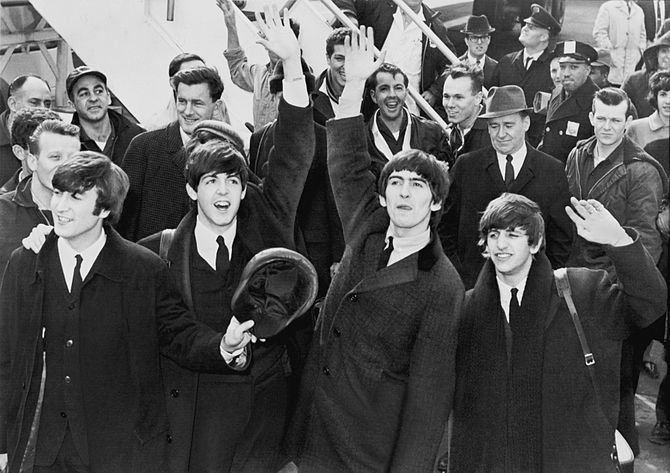 The Beatles wave to fans after arriving at Kennedy Airport. (Photo credit: Wikipedia)

The White Album was also different from other Beatle albums in that it was specifically mixed for stereo, and The Beatles were actually there to approve the stereo mixes. They’d never been interested in stereo before as their working process had been to mix a song in mono as soon as it was finished, and then leave the stereo to be mixed a while later, almost as an afterthought. Stereo still hadn’t really caught on in England at the time so no-one, not even the Fab Four, particularly cared about it.

As in the past, the stereo mixes for The White Album tended to be put off until the last minute again even though they were now deemed to be important. The reason for the importance was not what one might expect though. Paul explained to me whilst mixing the stereo version of “Helter Skelter” that it had to sound different from the mono version. Apparently fans started to buy both the mono and stereo albums and wrote to them asking if they knew there were differences between the versions, so Paul and/or the band saw this as a great way to boost sales.

Even during the stereo mixes we kept comparing them to the mono ones though. There was a strong possibility that a fan would take the record over to a friend’s place and play it on a system that was only mono, so you had to make sure it sounded good in both formats.

Mixing Back In The U.S.S.R.

Paul decided that he wanted the sound of a jet plane on the intro and end of the song. We copied the effect from a tape in the EMI sound effects library and made a loop so that it could be constantly playing and we could bring it into the mix at any time. If you listen to the song carefully, the sound of the jet at the end is totally different from what it sounds like in the beginning because the tape loop was so worn out by the end of the song that there was no high end left. It also stretched a little, which made it warble a bit as well. I don’t think we could’ve gotten another mix out of it.

“It was part of the tape op functions to take care of the tape machines and sound effects and stuff like that. We had this jet plane effect on a loop going around a pencil that I was holding because it was going to be introduced throughout the song. For the mono mix everything came out okay, but the stereo mix took a long, long time and I was holding this pencil to keep the effects tape taut. I guess I must’ve been leaning back on it because on the mono mix it sounds like a jet plane but on the stereo it has a wobble sound because the tape was starting to get creased. The mono has this clear, clean, lovely jet sound while the stereo is an abomination of a jet sound. That’s simply because I was leaning back while holding the pencil and started to stretch it, unaware by me and everyone else what was happening. When you compare the two it’s like, “Oh, my God. What were we thinking?”
~ John Smith [Ken’s assistant and tape machine operator]

The last session that I ever did with The Beatles as a band was a full 24 hour marathon to complete The White Album. Generally speaking, The Beatles never had a time schedule. They took as long as they wanted, and the project was done when they felt it was ready. This time was different though. It was the first time they were under the pressure of a deadline because the album was to be the first release on their new label, Apple Records.

We were always behind schedule, but the fact that it was a double album didn’t help, nor did the fact that right towards the end John came in with a new song called “Julia.” Luckily that was easy to record because it was just him and an acoustic guitar and a bit of double tracking, but all of the recording just kept on going way past the time when we should have been mixing and cutting.

The release couldn’t be delayed because there was a lot of promotion already set up and George H [Harrison] was slated to fly out to Los Angeles with the masters for Capitol to master for the American market, so it had to be completed in time. We were far enough behind that as soon as everyone from the studio had gone home for the day, we took over the entire EMI facility, including all three studios and listening rooms. I was in one studio doing a mix with one member of the band, then I’d pop into another control room with someone else for another mix there. John Smith was in Room 41 with John and Chris [Thomas – producer George Martin’s assistant] listening to different running orders for the record. It was mayhem, but was the beginning of a pattern that I became most familiar with as the years went on. It seemed that every time I was away from home on a project, the last 24 hours would be the same mad rush to finish it, then there’d be a mad dash straight to the airport to fly home. The White Album was just the first time it happened.

“I was in Room 41 with John’s Lennon and Smith making up running orders. Listening to so many different ones made us all a little nuts. By about 4AM John S was up to about four foot of tape, cutting these bits out and then re-splicing it. Ken came in about four in the morning and said, “Chris, can you help me? Paul wants to do another mix of ‘Helter Skelter’ but he’s fallen asleep at the mixer.” So I came in and we mixed it while he was still asleep, absolutely crashed out on the board.”
~ Chris Thomas

“John and Paul would sit down with a sheet of paper and make a running list on top of a copy of Sgt. Pepper [the album cover] on their lap in the first listening room. I’d then take the tapes into the second listening room and put it together while they were listening to a side that I had already edited in the first room. That took about 12 hours between all the re-edits of the four sides. Then they all went home and asked me if I could do the same thing with the stereo versions. I was probably up for 24 hours that day and working for at least 18. On many of the other days there was dope flying in and out of those studios, but on that night, everyone was stone cold sober.”
~ John Smith

The weirdest thing for me though had nothing to do with the actual record. I was driving home during rush hour after everything was finally put to bed and I was absolutely exhausted. I came to a traffic light that was red and fell asleep while waiting for it to change. The next thing I know there was a car horn hooting at me. I looked in the rear view mirror to find that there was my father in his car behind me, who then followed me all the way home to make sure I made it okay. The chances of that happening have to be at least a trillion to one, but like so much else in my life, it happened nonetheless.”