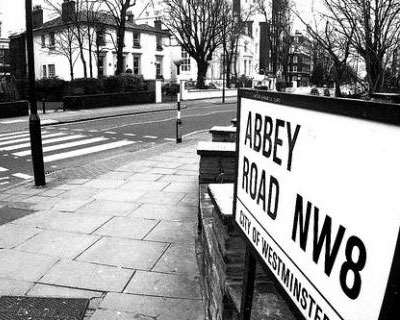 The recording sessions for the White Album started with the song Revolution on May 30, 1968, and concluded with Take 3 of Julia on October 13, 1968. Mixing was completed five days later on October 18, 1968. Recorded mostly at Abbey Road Studios, with some sessions at Trident Studios. Although productive, the sessions were reportedly undisciplined and sometimes fractious and took place at a time when tensions were growing within the group.

Concurrent with the recording of this album, The Beatles were launching their new multimedia business corporation Apple Corps, an enterprise that proved to be a source of significant stress for the band. Also recorded during the White Album sessions were What’s the New Mary Jane and Not Guilty. These two tracks were only available on bootlegs for many years but were finally released for the first time 28 years after they were recorded on Anthology 3 in 1996.

The sessions for The White Album marked the first appearance in the studio of Lennon’s new girlfriend and artistic partner Yoko Ono, who would thereafter be a more or less constant presence at all Beatles’ sessions. Prior to Ono’s appearance on the scene, the individual Beatles had been very insular during recording sessions, with influence from outsiders strictly limited. McCartney’s girlfriend at the time, American scriptwriter Francie Schwartz, was also present at some of the sessions.

Author Mark Lewisohn reports that The Beatles held their first and only 24-hour recording and producing session near the end of the creation of The Beatles, during which occurred the final mixing and sequencing for the album. The session was attended by John Lennon, Paul McCartney, and producer George Martin. 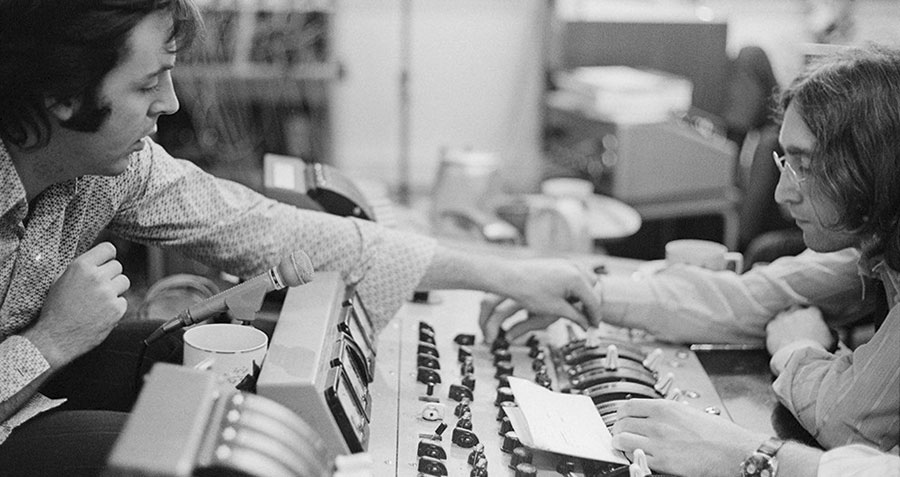 Paul McCartney, John Lennon, and George Martin monitor the playback of the recording. Lennon is adding chamber echo to track 3, McCartney is controlling the volume of track 3, while Martin is controlling master volume of output 1 (usually employed for mono mixing). (photo by Linda McCartney).

Division and Discord in the Studio

Despite the album’s official title, which emphasized group identity, studio efforts on The Beatles captured the work of four increasingly individualized artists who frequently found themselves at odds. The band’s work pattern changed dramatically with this project, and by most accounts the extraordinary synergy of The Beatles’ previous studio sessions was harder to come by during this period. Sometimes McCartney would record in one studio for prolonged periods of time, while Lennon would record in another, each man using different engineers. At one point in the sessions, George Martin, whose authority over the band in the studio had waned, spontaneously left to go on holiday, leaving Chris Thomas in charge of producing. During one of these sessions, while recording Helter Skelter, Harrison reportedly ran around the studio while holding a flaming ashtray above his head.

Long after the recording of The White Album was complete, Martin mentioned in interviews that his working relationship with The Beatles changed during this period and that many of the band’s efforts seemed unfocused, often yielding prolonged jam sessions that sounded uninspired. On July 16th recording engineer Geoff Emerick, who had worked with the group since Revolver, announced he was no longer willing to work with the group.

The sudden departures were not limited to EMI personnel. On August 22nd, Starr abruptly left the studio, explaining later that he felt his role was minimized compared to that of the other members, and that he was tired of waiting through the long and contentious recording sessions. Lennon, McCartney, and Harrison pleaded with Starr to return, and after two weeks he did. According to Lewisohn’s book The Complete Beatles Chronicle, McCartney played drums on “Back in the U.S.S.R.”

However, according to Lewisohn, in the case of “Dear Prudence” the three remaining Beatles each took a shot at bass and drums, with the result that those parts may be composite tracks played by Lennon, McCartney and/or Harrison. As of 2008, the actual musician/instrument lineup is still undetermined.

Upon Starr’s return, he found his drum kit decorated with red, white and blue flowers, a welcome-back gesture from Harrison. The reconciliation was, however, only temporary, and Starr’s exit served as a precursor of future “months and years of misery,” in Starr’s words. Indeed, after The White Album was completed, both Harrison and Lennon would stage similar unpublicized departures from the band. McCartney, whose public departure in 1970 would mark the formal end of the band’s ensemble, described the sessions for The Beatles as a turning point for the group. Up to this point, he observed, “the world was a problem, but we weren’t. You know, that was the best thing about The Beatles, until we started to break up, like during the White Album and stuff. Even the studio got a bit tense then.” 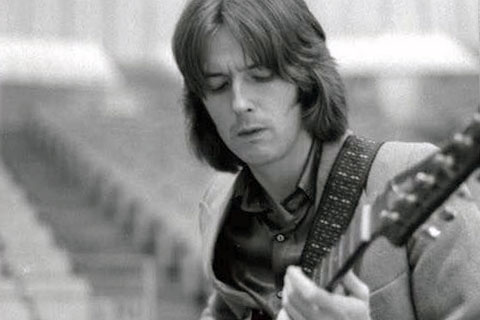 George Harrison asked Eric Clapton to play lead guitar on While My Guitar Gently Weeps. George soon reciprocated by collaborating on the song Badge for Cream’s last album Goodbye. Harrison explains in The Beatles Anthology that Clapton’s presence temporarily alleviated the studio tension and that all band members were on their best behavior during his time with the band in the studio.

Clapton was not the only outside musician to sit in on the sessions. Nicky Hopkins provided electric piano for the single cut of Revolution, (recorded during these sessions) as well as acoustic piano for a few others; several horns were also recorded on the album version of Revolution. Savoy Truffle also features the horn section. Jack Fallon, a bluegrass fiddler was recruited for Don’t Pass Me By, and a team of orchestral players and soothing background singers ended up being important contributors to Good Night

The sessions for The Beatles were notable for the band’s formal transition from 4-track to 8-track recording. As work on this album began, Abbey Road Studios possessed, but had yet to install, an 8-track machine that had supposedly been sitting in a storage room for months. This was in accordance with EMI’s policy of testing and customizing new gear, sometimes for months, before putting it into use in the studios. The Beatles recorded Hey Jude and Dear Prudence at Trident Studios in central London, which had an 8-track recorder. When they found out about EMI’s 8-track recorder they insisted on using it, and engineers Ken Scott and Dave Harries took the machine (without authorization from the studio chiefs) into the Number 2 recording studio for the group to use. 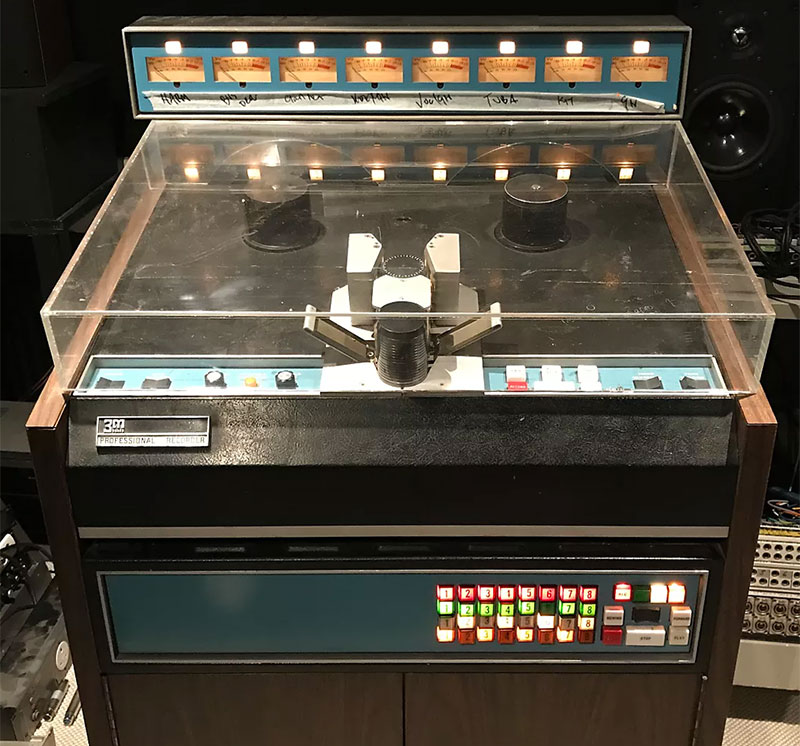 The resulting tracks did not have the same sound as previous Beatles albums had. Thinking that something was wrong with the sound of EMI’s new 3M M79 8-Track machine (shown here), they asked to have a technician check the factory calibration of the machine.

The technician using a calibration tape showed the recording engineers that nothing was wrong with the machine, that it was calibrated perfectly to factory standards.

The recording engineers were stymied, until they were told by industry professionals that the previous mixing boards at EMI had been valve (US English: tube) powered boards making the earlier Beatles albums sound different. The new mixing boards were the culprit, not the new 3M 8-Track recording machine. It, therefore, took some time before the EMI engineers were able to get the quality of sound they wanted using these transistorized mixing consoles. The EMI engineers were finally able to get the same quality of sound of earlier Beatles albums on Abbey Road. 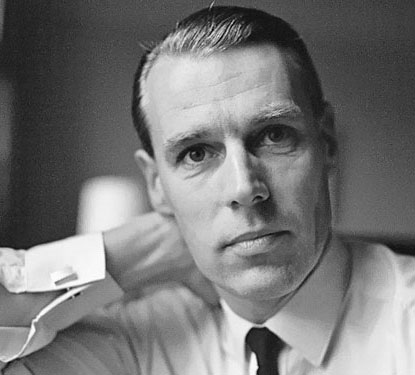 “…one can sense the presence of the great engineers and producers of the past, long since gone. Names which may mean little to the average man, but great people such as Arthur Clarke, Dougie Larter, Bob Beckett, Charlie Anderson, Walter Legge, Charlie Thomas and my dear own mentor, Oscar Preuss, who taught me so much. These men flew the record industry in open cockpits by the seat of their pants, and paved the way for the modern, jetstream, computerized machine that today’s young talents have to guide.”