Where do you go after your last album cover broke all the rules in terms of creativity and cost? In the wake of the groundbreaking sleeve design for Sgt. Peppers Lonely Hearts Club Band, the Beatles turned once again to gallery owner and Pop Art devotee Robert Fraser. As the person who had introduced the group to Sgt. Peppers designers Peter Blake and Jann Haworth, Fraser had just the man for the next Beatles project, Richard Hamilton.

By the 1960s, Hamilton was showing with Robert Fraser, who was arguably one of the most influential gallerists of his era. One of Hamilton’s most enduring series, “Swingeing London,” was based on news photos of Fraser’s infamous drug-possession arrest with Rolling Stones frontman Mick Jagger, during a party at guitarist Keith Richards’s country home. Fraser was the one who introduced Hamilton to McCartney, and, knowing he had already commissioned and rejected two other attempts at the cover art for the new album, suggested the singer hire Hamilton. While John Kelly took the portraits in the gatefold sleeve, McCartney gave Hamilton three tea chests full of photographs for the collage, Hamilton’s primary media at the time, for the poster insert.

Paul McCartney requested the design be as stark a contrast to Sgt Pepper’s day-glo explosion as possible… he got it!

Hamilton explained, “Paul McCartney requested the design be as stark a contrast to Sgt. Pepper’s Day-Glo explosion as possible… he got it.” The 45-year-old artist came up with the plain white cover with the words The Beatles embossed on it, and a serial number to indicate a limited edition pressing although there seems to be some question as to whether two or five million albums featured the serial number. His earlier ideas to feature a coffee cup stain on the cover or impregnate the cover with apple pulp in honor of the newly formed Apple Corps were considered too flippant, and impractical.

However, Hamilton’s idea to call the new double album simply The Beatles was taken on board. Released in November 1968 it was immediately dubbed the White Album. The cover featured a unique stamped number, to create in Hamilton’s words, “the ironic situation of a numbered edition of something like five million copies.” Hamilton intended the cover design to resemble the look of conceptual art, an emerging movement in contemporary art at the time. 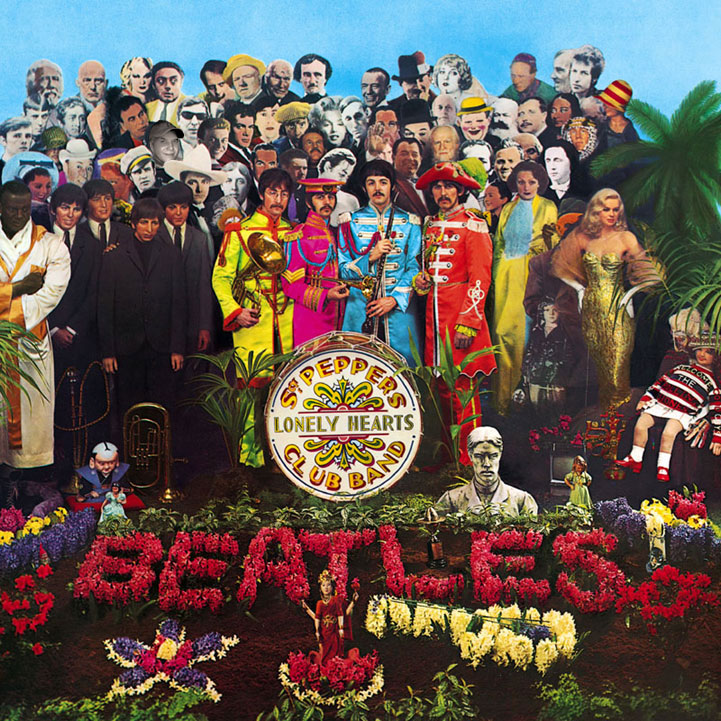 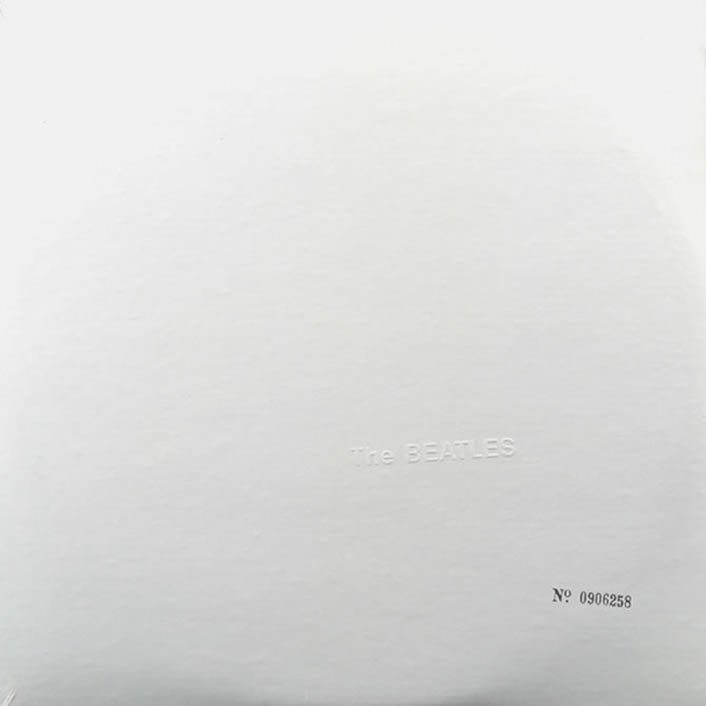 Hamilton’s design contrasts strongly with the exuberantly colorful and busy cover for Sgt. Pepper designed by Hamilton’s former student, Pop artist Peter Blake and his wife Jann Haworth. Perhaps because Blake’s cover is so deeply inspired by Hamilton (it is much more Hamiltonesque than the White Album cover), Hamilton rebelled against his own style, choosing simple lines for the White Album that make it unlike most of the Pop art produced in this era, including Hamilton’s other work, and more like Minimalism.

Most assume the stark white cover that adorns the Beatles ninth LP was the brainchild of John Lennon and Yoko Ono. It’s minimalist and conceptual art influence was definitely in step with the pair’s avant-garde leanings. Lennon himself had utilized both a white canvas and white balloons in his You Are Here exhibition held July of that year at the Robert Fraser Gallery. The final cover design for The Beatles is the only sleeve of a Beatles’ studio album not to show the members of the band on its front cover. 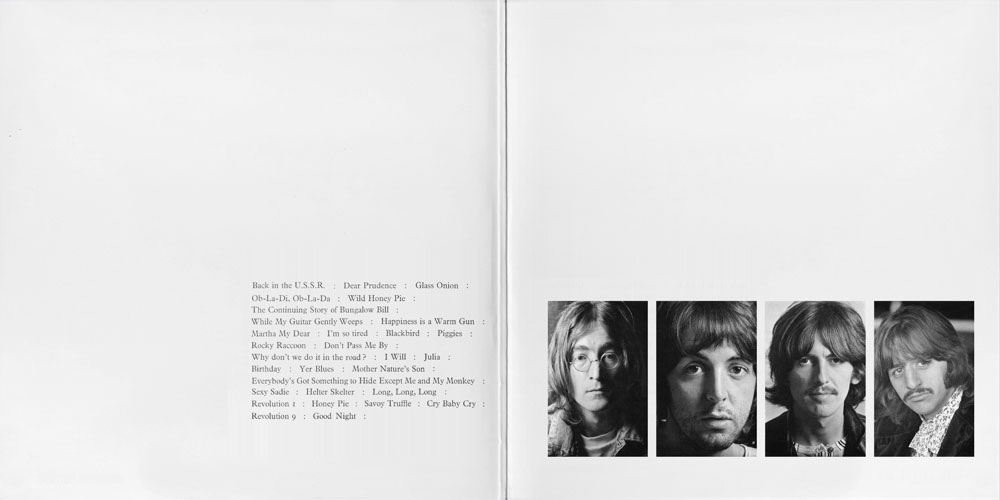 The inter-sleeve was a bit more conventional, with song titles listed on the inter-left gatefold, on the lower right, and four black and white portraits on the lower portion of the inter-gatefolds right side. As the music contained within was less a collaboration and more the result of three distinct songwriters in John, Paul, and George, so too did Hamilton’s design, with its utilization of solo shots of each band member, focus on the Beatles as individuals rather than a group. 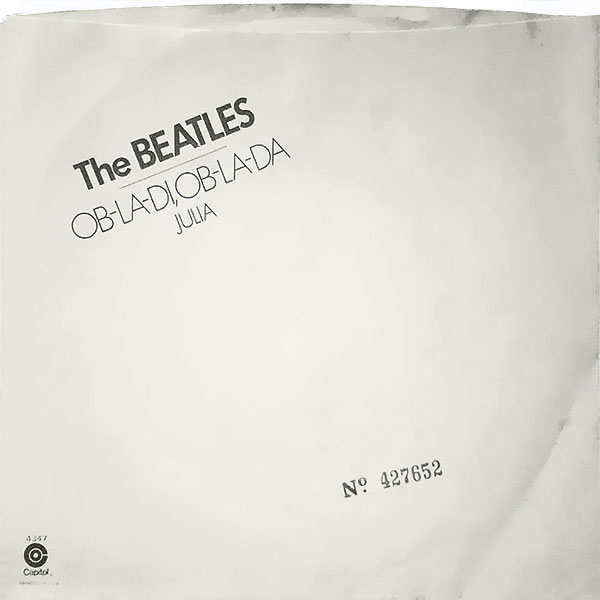 The first two million copies of the LP also had an individual edition number. Copies were numbered, the same system used at all 12 pressing plants (so there are 12 1s, 12 2s, etc). Also, due to a dispute over banding (where the space between songs is visible on the record), some copies are banded and some aren’t, even between copies pressed at the same plant. No singles were issued from the album in the U.S. market until 1976 when Capitol released Ob-La-Di, Ob-La-Da as a single with Julia as the B-side. 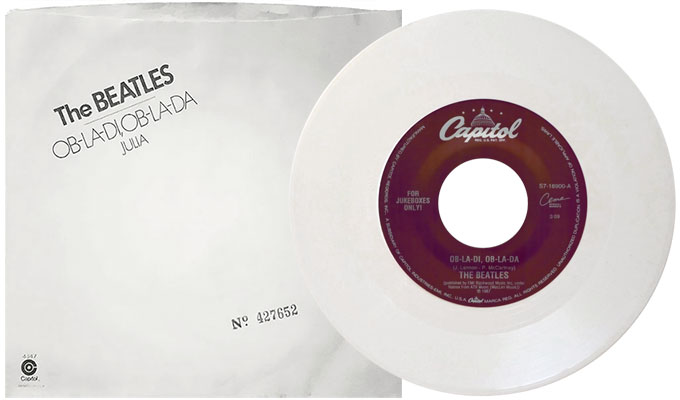 Capitol Records released Ob-La-Di, Ob-La-Da as a single with Julia as the B-side in 1976.

The first two million copies of the LP also had an individual edition number. Copies were numbered, the same system used at all 12 pressing plants (so there are 12 1s, 12 2s, etc). Also, due to a dispute over banding (where the space between songs is visible on the record), some copies are banded and some aren’t, even between copies pressed at the same plant. No singles were issued from the album until 1976, when Ob-La-Di, Ob-La-Da was released as a single with Julia as the B-side. 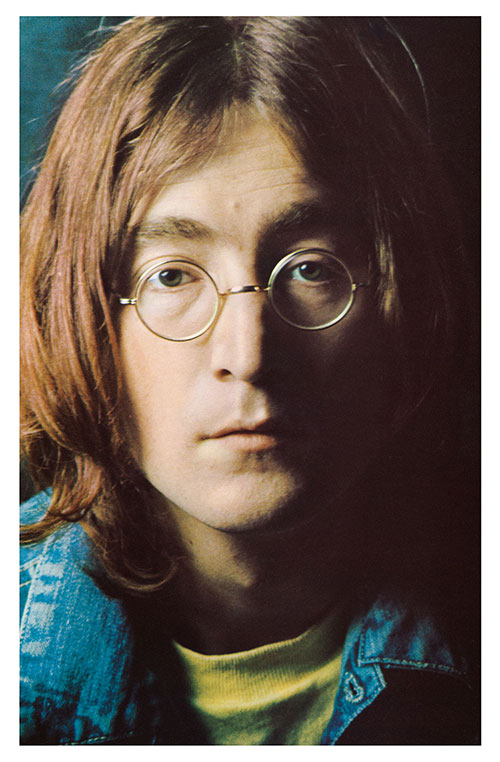 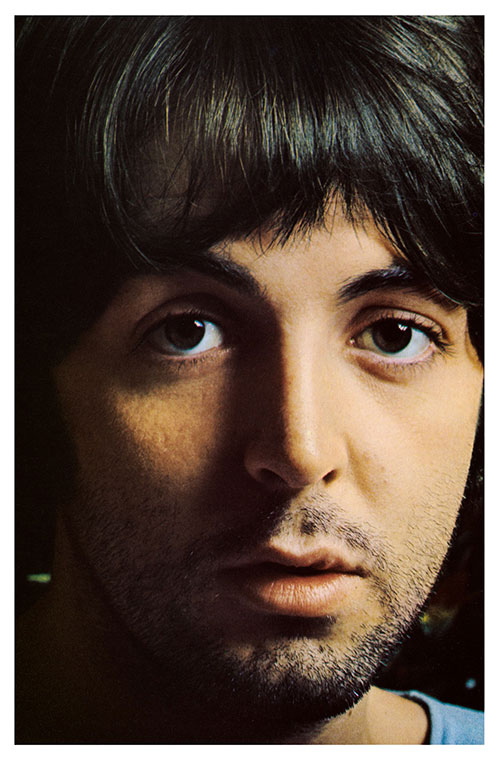 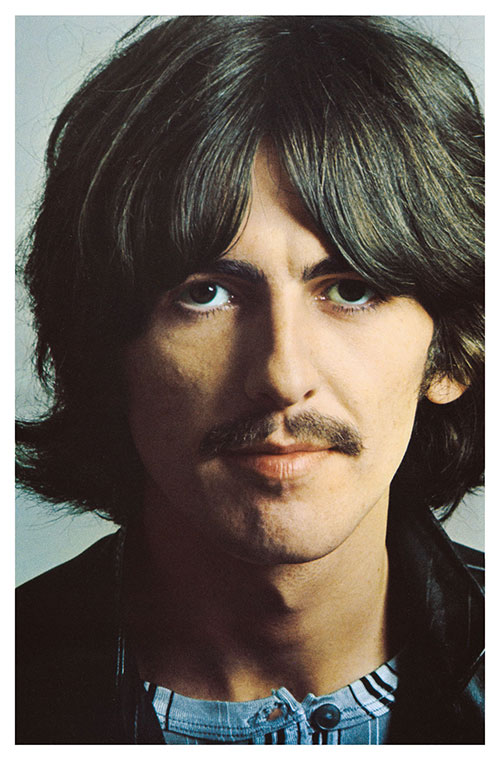 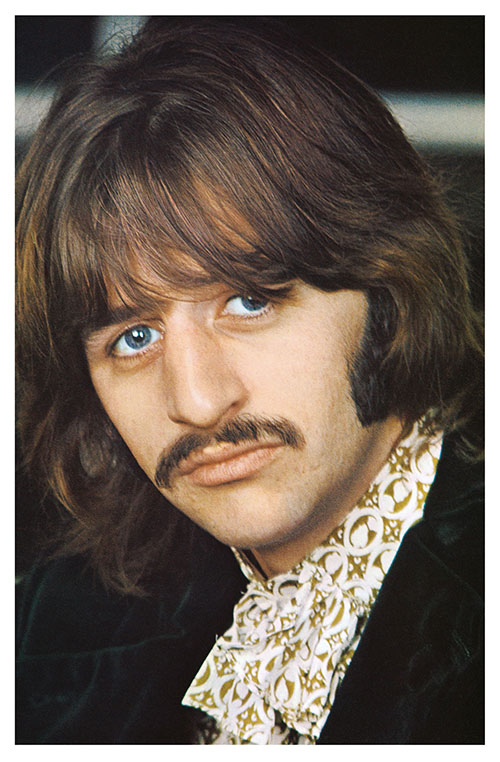 The set of four color photographs of the individual band members were taken during the autumn of 1968 by Photographer John Kelly. Hamilton came up with the montage idea for the large free poster insert that also contained the album’s lyrics printed on its reverse side. Because each album was also stamped with an individual serial number Hamilton considered the enclosed poster a limited-edition print being circulated to millions of individuals (everyone who owns a copy of this album owns an original Richard Hamilton print) and was thus very much in keeping with the democratic aims of the Pop Art movement he did so much to start. 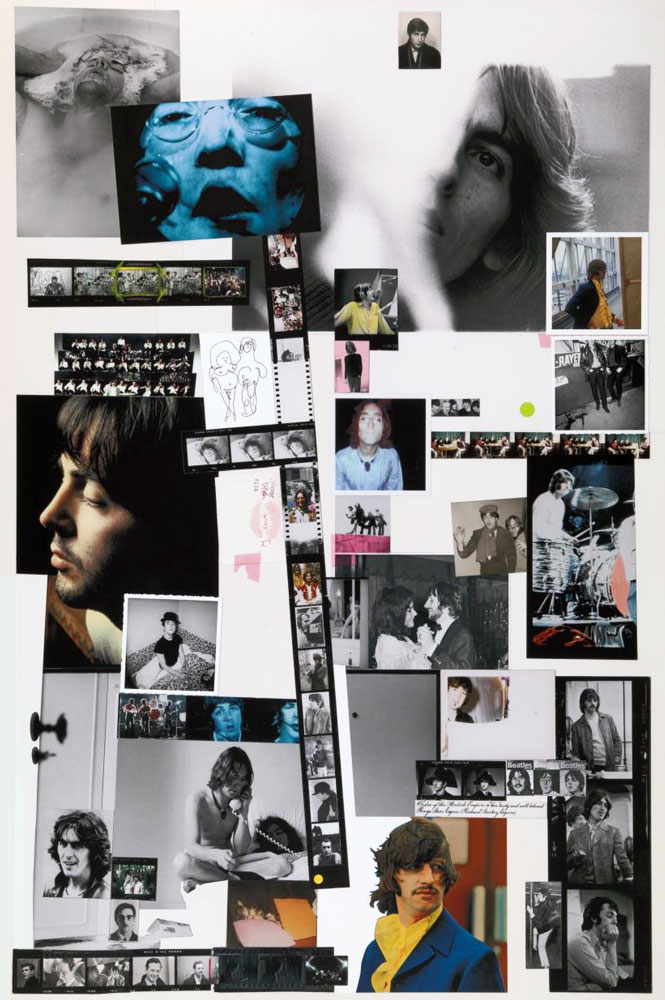 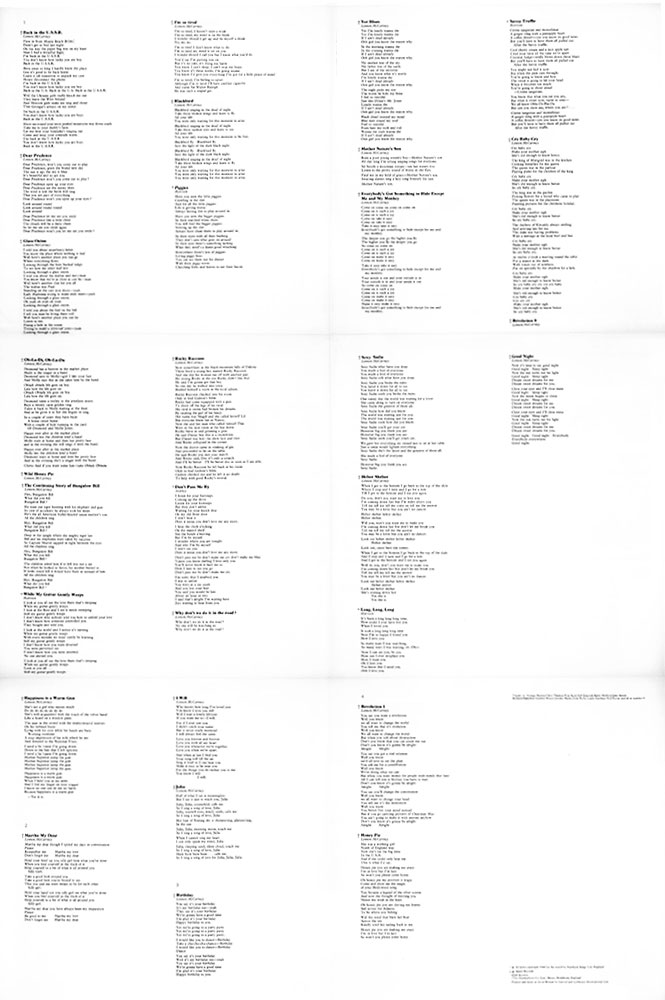 The final product was a double-gatefold LP wrapped in a plain white sleeve with a heavy gloss surface; the original pressing had only two markings adorning the front of the cover: The Beatles embossed slightly below the middle of the album’s right side, slightly off-kilter and, a serial number in the bottom right corner.

Apart from being one of the greatest albums of all time, The White Album is a true cross-over between visual and musical culture. It is a work of art and an everyday object that has become part of popular culture in its own right. Through this, Hamilton bridges the gap between art and design, high and low culture, and mass production and individuality. 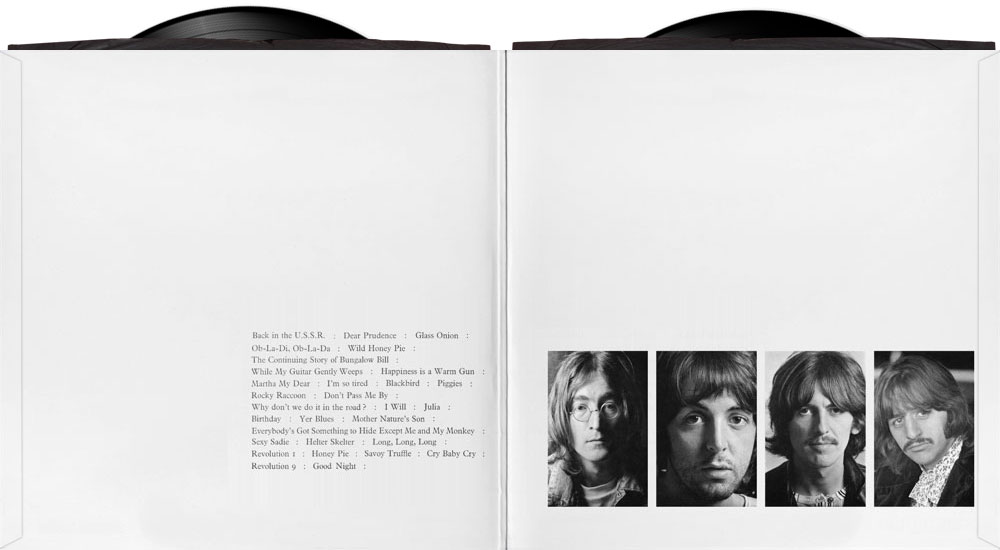 The LP’s first UK release had outlets at its top and was known as the Open Top cover.

The LP’s first UK release had outlets at its top and was known as the Open Top cover.

The LP’s original U.K. release had outlets at its top and was known as the Open Top cover. Flaps inside the gatefold cover were visible at the left and the right sides. Early copies were issued with a protector sheet placed on the top of each photo and had a custom black inner sleeve. The music publisher’s name for George’s and Ringo’s songs was printed Apple Publishing Ltd. on the first printing and was changed afterward to Harrisongs Ltd. and Startling Music.

While John Lennon apparently claimed the album with the number No. 0000001 as his own, “because he shouted the loudest” explained Paul, it was Ringo Star who actually put the unique album up for sale in an American auction house in December 2015. Ringo’s U.K. pressing stamped No. 0000001 (because of the different numbering systems used by various plants, there are several copies of the White Album with a No. 0000001 stamp) fetched a world record $790,000.

Years earlier Hamilton, who died in 2011, recalled that he was paid around 200 pounds for his work and commented, “I thought that was a bit mean. I was surprised how little we got.”

OCT. 30, 2018 — A cheeky new music video for The Beatles’ Glass Onion premiered Tuesday (Oct. 30) ahead of the release of the 50th-anniversary edition of The White Album.

The video includes rare footage of the legendary English rock band and shows the creation of The White Album’s pull-out poster through vivid animations that reference elements iconic to the band’s career. For example, at one point a yellow submarine is shown in McCartney’s bubble bath while later an American-flag pencil moves to erase a nude John and Yoko animation representing the U.S. censorship of a similar drawing.

The new poster was put together by Paul McCartney alongside art director Richard Hamilton at his London studio. They built it by arranging pictures supplied by each band member on an easel.

The Beatles’ forthcoming White Album re-release — featuring newly mixed version of the 30 original tracks, 27 acoustic demos and 50 session takes (most of which haven’t been released) — drops Nov. 9. View a sneak peek of the new video above.

Trunk Animation celebrated the 50th Anniversary release with an inventive new music video made for one of the album’s most beloved tracks.

White and yellow. Two colours that can mean many things to different people, but which have a special resonance in 2018 to any fan of the Beatles.

Earlier this year saw the 50th anniversary of the Fab Four’s animated classic Yellow Submarine, and this month marks the same half-century celebration of the group’s seminal White Album, with a brand new video coming out in celebration of the LP. Glass Onion, one of the album’s best-known tracks, was given a very ambitious stop-motion promo from animation house Trunk.

We reached out to speak with Trunk art directors Alasdair Brotherston and Jock Mooney, and learned a bit more about the Glass Onion video, which is embedded above, along with a making of video released by Trunk. The video for Glass Onion takes as its inspiration a poster that came with the self-titled LP on its release back on November 22, 1968 (shortly before it was dubbed the White Album by the world at large).

The collage featured a montage of images including photographs, strips of film, drawings, and hand-colored elements, all of which were provided by the Beatles to pop artist Richard Hamilton and Paul McCartney. The pair then assembled a varied and detailed collage that reflects the eclectic nature of the album’s tracks, and which Alasdair and Jock brought to life for the video above.

Alasdair explained to Digital Arts about the importance of Hamilton’s original collage piece from 1968 for his and Jock’s work in 2018. “At the outset of the project we heard an interview with Paul McCartney,” he says, “in which he explained how important it was that the collage he made with Richard Hamilton was created real scale – no elements were scaled up or shrunk down during the creative process and this gave rise to particular juxtapositions and techniques that informed the finished piece.”

“We were adamant that we would approach this project in the same way, in the full knowledge that it would cause us some problems on the shoot. (As such) I am most proud that everything you see in the video was created at the scale originally intended and we embraced the challenges that those constraints threw up and that overcoming those really informed the look and feel of the finished piece.

“There were some things that it just wasn’t practical to capture on the main shoot – the 2D animation of John & Yoko escaping the U.S censors pencil for example,” Alasdair continues. “It would have been crazy to attempt that live in camera. But even with that we animated at the same scale as the original drawing and was worked in pencil on paper. The vast majority of what you see was captured in camera, which is largely thanks to the skill of the art department at Trunk and the crew at Clapham Road Studios.”

Excerpts from an article by Giacomo Lee | Published on February 06, 2019 by Digital Arts